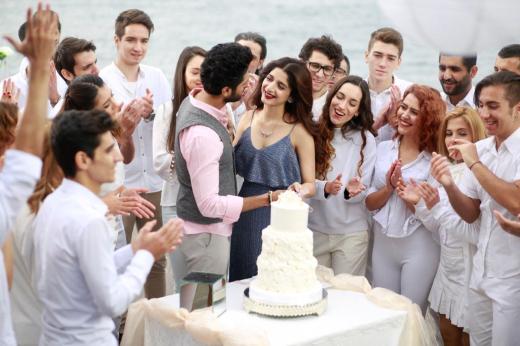 Karachi (Cliff News)ARY Films is all set for the release of their much anticipated sequel, Jawani Phir Nahi Ani 2. The film is a romantic comedy with a powerhouse cast, and is releasing this Eid-ul-Azha.The film is produced under the banner of Salman Iqbal Films and ARY Films along with Six Sigma Plus. Jawani Phir Nahi Ani 2 is written by Vasay Chaudhry and directed by the talented, Nadeem Baig, the man behind the biggest blockbusters of Pakistan, Jawani Phir Nahi Ani and Punjab Nahi Jaungi of ARY Films.The awe-inspiring cast includes Kubra Khan, Humayun Saeed, Fahad Mustafa, Mawra Hocane, Vasay Chaudhry, Ahmed Ali Butt, Sarwat Gillani, Uzma Khan in lead roles. While Safina Behroz, Kunika Lall, Shehzad Khan, Kanwaljit Singh, Sohail Ahmed and Omer Shahzad will be seen as supporting characters.Jawani Phir Nahi Ani 2 is shot in most beautiful and exotic locations of Turkey and Dubai. The story of the film revolves around the lives of four men that is full of comical situations. The audiences can expect a fun-filled roller coaster ride and full-fledged family entertainment.Behind the scenes of the romantic song,Behka Re have been taking social media by the storm where the new couple Humayun Saeed and Kubra Khan, Fahad Mustafa and Mawra Hocane are seen in a romantic setting in scenic locations of Turkey. The song’s music and vocals are by Shiraz Uppal while the mesmerizing lyrics are by Shakeel Sohail.The song “Behka Re” has become the new love anthem for 2018 and is already a hit amongst the audiences.

ARY Films is a film distribution and production company in Pakistan, part of ARY Digital Network. ARY Digital Network has started up a company with the name of ‘ARY Films’. It has taken its first step towards becoming the premium entertainment provider in the region with the first commercial release ‘Main Hoon Shahid Afridi’ which was successfully running nationwide.ARY Films is the only Brand in Pakistan which is not only releasing films in Pakistan but also worldwide in countries which include UK, USA, Canada, Europe and the Middle East.