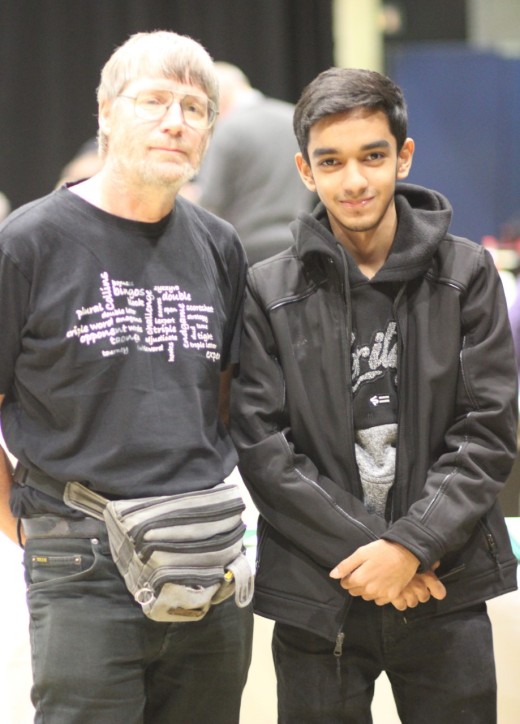 The other quarter finalist are

The division B was completely dominated by the young Pakistani players in a way that the top five positions were occupied by Pakistani players.The first position kept changing hands between the Hadi twins until finally Hammad Hadi finished on top at the end of round 35. His twin brother Hassan Hadi had the same number of wins (27) and a slightly lesser spread.It is the first instance of two brothers finishing at 1st and 2nd in the World Scrabble Championship.Daniyal Sanaullah finished 3rd and Taha Mirza 4th while the 12 year old Monis Khan managed to hold firm til the end to occupy the 5th position.This is also a unique instance in the world championship history that the top five positions were occupied by players from one country.

Karachi(Cliff News)Best of Pakistani Celebrities namely Hareem Farooq, Osman Khalid Butt, Adnan Siddiqui and Shahzad Roy travelled over Canada during the Eid Weekend to celebrate the Mississauga Halal Food Festival that was held in Canada.IHA entertainment in Collaboration with Another Hit inc. and Universal promotions arrayed the Mississauga Halal Food Festival on June 16 & 17, 2018 at the Celebration Square Mississauga, Toronto.The renowned vocalist Shahzad Roy rocked the stage and along with HareemFarooq & Osman Khalid Butt left the audience awestruck. The celebrities had a great time in extravaganza and took selfies with their fans in Canada.IHA entertainment was one of the key organizers of the event and incarnated Pakistan entertainment at such a platform, where over 27,000 people attended the two days festival.

Karachi/Toronto(Cliff News)As part of its mandate to project Pakistan’s image and its trade and investment potential, the Consulate General of Pakistan Toronto arranged a webinar titled ‘Investment opportunities in Pakistan’ held recently at Pakistan House. The Minister of State and Chairman Board of Investment Mr. Naeem Zamindar made a live skype presentation to the participants.The webinar was attended by prominent and reputed Canadian businesses including President & CEO of Ontario Chamber of Commerce (OCC), Vice President of OCC, CEO of JCM Power, Chairman of Robson Capital, Chairman of Morgan Solar, Partner Stikeman Elliot, Director MIDAS Safety, Chairman of CMI Group and representatives of Gravitas Financial and Polaris Capital Power.In his presentation, the Minister of State said, “Pakistan has made progressive strides recently for improvement of ease of doing business and created a favorable environment to attract investment. Pakistan’s large population and geo-strategic location makes it an ideal investment destination.”Referring to marked improvement in ratings for Pakistan in the recent international surveys and reports, the Minister said that appropriate mechanisms were in place in Pakistan for protection and high return on investments.On ease of doing business, the participants were informed that the government has established a single window facility for setting up of a company. There is 100% repatriation allowed on remittances of royalty, technical and franchise fee, profits, dividends, capital and capital gains. Moreover, utilities and land connectivity are ensured by law and there is one time duty exemption on import of plant and machinery. Earlier, Mr. Imran Ahmed Siddiqui, Consul-General for Pakistan while welcoming the participants, said “It is the right time and the right place for doing business in Pakistan, we are on a vertical curve, our ratings are positive, innovation and technology are the focus, widespread infra-structure developments in place and a thriving economy is a strong indicator. I am grateful to you for showing your interest in doing business with Pakistan.”The participants gave positive feedback on the event and keeping in view the incentives on the offer, expressed interest in exploring investment opportunities in Pakistan.